Showing posts from September, 2019
Show all 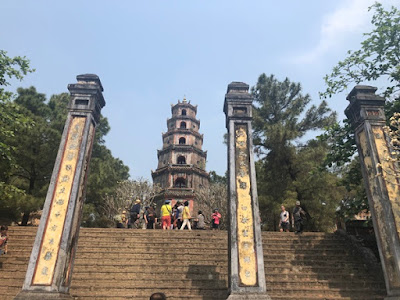 Tien Mu Pagoda is located at the north bank of the Perfume River, about 5 kilometer away from the centre. It has more than 400 years old and one of the most beautiful and well-preserved religious sites in Vietnam. Its seven-story octagonal and 21-meter-high Fuyuan Tower is the iconic building of the Tien Mu Pagoda and Hue. 天母廟位於香江的北岸，距離市中心大概有5公里。它已經有超過400年的歷史，也是越南最美麗和保存得最好的宗教群址。廟前有一座七層高八角形的塔，它是天母廟和順化發的標誌。 The name of the pagoda comes from a legend. Long ago an old woman known as Thien Mu (literally "Heavenly Lady") appeared on the hill where the pagoda now stands. She told the local people that one day a King would come and build a Buddhist temple for the country’s prosperity. In 1601, on hearing this legend, King Nguyen Hoang began construction of the pagoda. Further constructions and renovations were done during the succeeding centuries and the Phuoc Dien Tower at the entrance to the complex was built in 1864 by Emperor Thieu Tri.  關於天母廟的民間傳說,是因當
Post a Comment
Location: Hương Hòa, Thành phố Huế, Hương Hòa Thành phố Huế Thừa Thiên Huế 532761, Vietnam
Read more 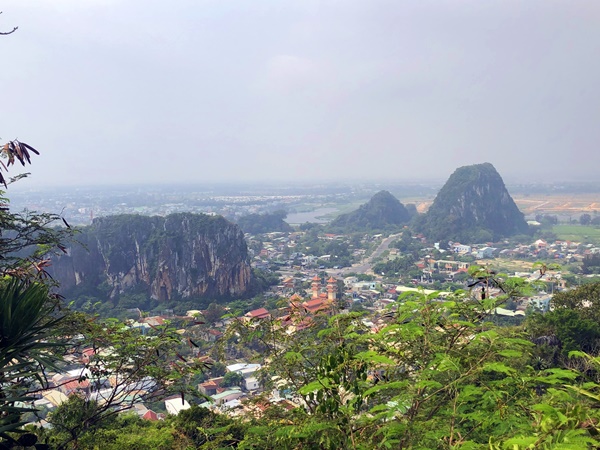 I have to say that we visited the Marble Mountains quite unprepared. Yes, we read about it sometime before but the details did not stay on our mind. We missed the Am Phu Cave ( Hell Cave ) which may be the most beautiful cave in the area. The entrance is not direct at the ticket counter. Never mind, we had good hours at the Marble Mountains. One of the caves visited is stunning with heavenly light pierced through the gap on the top. The Marble Mountains are a group of five limestone and marble hills. It started to be important since the time of Cham which regarded the mountains as holy. Throughout centuries, Hindu, Buddhist and Taoist built shrines in caves which made the place a perfect sanctuary. In 1825 the Vietnamese King Minh Mang named the mountains “Ngu Hanh Son”. It translates as the Five Elements Mountains. Each mountain is named after one of the five essential elements in the Eastern Philosophical thought: Kim (metal), Tho (earth), Moc (wood), Hoa (fire), an
Post a Comment
Location: 52 Huyền Trân Công Chúa, Hoà Hải, Ngũ Hành Sơn, Đà Nẵng 550000, Vietnam
Read more 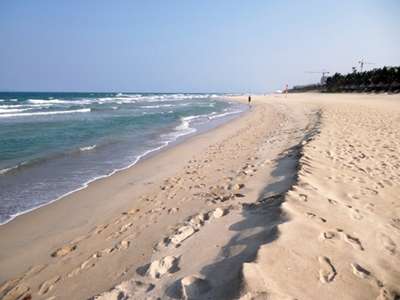 Da Nang is one of the most beautiful coastal cities in Vietnam. The coastline stretches 35km between Hai Van Pass and Non Nuoc . My Khe Beach is known for its blue sky, white fine sand, gentle slope, clear and warm water year-round. Its coastline extends up to 10km and is easy to reach from the city centre, just 5km away. To the right is the Marble Mountains . Going left, one can reach the  Son  Tra  Peninsula .   There stand a 67 metre tall outdoor Lady Buddha and Linh Ung Pagoda .   We wished to visit the peninsula.   Unfortunately, it was hazy on our second and last day. We would not have a great view from there. Click here to get more information about the peninsula. Apart from strolling along the beach and swimming, there are many options for water sports . Parasailing is the most popular sport.  We could see them taking off, flying and descending every minute.  Other beloved sports include jet skiing and banana boat. Jet skiing is used most c
Post a Comment
Location: My Khe Beach, Phước Mỹ, 550000, Vietnam
Read more
More posts