Showing posts from December, 2014
Show all 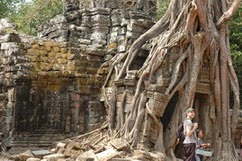 14 Feb 2014 Ta Som is a mini version of Ta Prohm which tree roots invading temple structure is the distinctive feature.  Building time is late 12 century to 13 century.  Style is Bayon .  Its layout is extremely simple: three concentric enclosures and very little in the way of annex buildings. Major spots nearby are Neak Pean and Preah Khan . For me, Ta Som 's charms are a combination of semi-ruined state, dominant giant trees occuping the temple structure, outstanding sculptures, children in the complex and paintings hanging outside.
Post a Comment
Location: Siem Reap, Cambodia
Read more 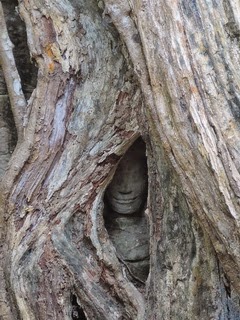 Ta Prohm is one of the most visited sites of the Angkor Archaeological Park .  Its distinctive feature is a ruin in a jungle and temples are occupied by giant trees.  Their roots invade the temple structure.  The complex was not restored to the original state but incorporated the trees as it is now.  One can find information about the site easily.  So, photos are shown here for your preview and impression prior to visiting the spot.  Instead of showing the tree roots, I'll highlight a sculpture face hidden behind a big tree trunk.  Hope you can find it when you are there and be amazed.   Once you are in the complex, you will pass through beautiful corridors into the complex.  Then the views will be commonly temples, sculptures and roaring tree roots dominating scenes.       Stick to your travel companion during the visit.  There are way too many tourists and you can go all directions.  It's a maze.   My companion and I lost each other
Post a Comment
Location: Ta Prohm, Krong Siem Reap, Cambodia
Read more 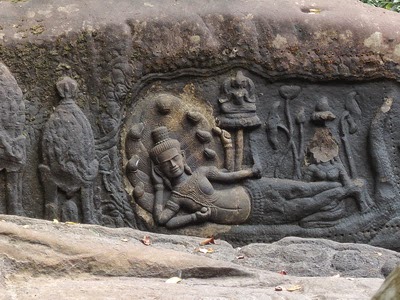 Kbal Spean is a unique archaeological site situated 50km from the Siem Reap.   Religious stone cravings sit on the river banks and bed, 150m stretch of the Stung Kbal Spean River.     Kbal Spean is commonly known as the "Valley of a 1000 Lingas " or "The River of a Thousand Lingas". Lingas are phallic representations sacred to Brahmanism.   It is a symbol of fertility.   Hundreds of them are carved into the rock of the river.   Other carvings include gods such as Vishnu , Shiva , Brahma and animals. To appreciate the beautiful carvings in the nature, one has to climb a trek for around 30 minutes.   Exhausted but worthwhile. Reclining Vishnu is often the theme of carvings.   Others include Shiva and Uma mounted on the bull, Brahma on a lotus petal and still others which I can't figure out exactly. Animals, lingas, yoni dot here and there.            Downdream is a waterfall. On the way is another spot with carving
Post a Comment
Location: Bridge Head, Phnom Koulen National Park, Cambodia
Read more
More posts