Showing posts from September, 2014
Show all

- September 18, 2014
27 July 2013 Franz Marc - Blaues Pferd It's my birthday.  This time we went to München (Munich), a city last visited many years ago.  I was alone last time, visiting the new and old Pinakothek , English Garden .  This year, Family Heim was with me.  We took a Bavaria ticket from Nürnberg to München for 40 Euro, with unlimited rides on local train and all kinds of transportation free. Alexej Jawlensky - Bildnis des Tänzers Alexander Sacharoff Our first stop was a tiny church with modern interior decoration,then the Museum part.  The destination for the morning was Lenbachhaus .  The key exhibitions include 19th century paintings, Joseph Beuys, Art after 1945 and Blue Rider Collections.  This article features the Blue Rider (Blauen Reiter) Collection. Blue Rider was a group of artists rejecting the Neue Künstlervereinigung Munich as it has become too strict and traditional.   It was formed with a group of Russian painters ( Wassily Kandinsky ,  Alex
Post a Comment
Location: Städtische Galerie im Lenbachhaus, Luisenstraße 33, 80333 Munich, Germany
Read more 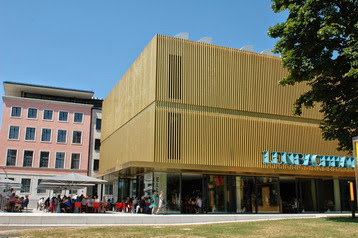 27 July 2013 ﻿ I was blessed to have my birthday again in Germany. Sunshine in vibrant München.  Ah ha, temperature was around 40C, my hottest birthday.  We were there to see the newly renovated Lenbachhaus , just completed in May 2013.  Eyes wide opened.   Apart from the Blue Rider exhibition, it also houses a rich collection of 19th century German paintings and After 1945 Art. In 1929 the Städtische Galerie was established in the former residence of the artist Franz von Lenbach.  The director at time was ambitious to bring together Munich paintings and contemporary art as a big collection.  Unfortunately the development was thwarted during the Nazis period.  It suffered from damages and destruction.   Gradually, it recovered, refurbished.   In 1957 it received generous donation from Gabriele Münter and Johannes Eichner Foundation which major paintings of Blue Rider could be displayed. It held key exhibitions and drew visitors from many places.  In 2003 it started to reno
Post a Comment
Location: Luisenstraße 33, 80333 Munich, Germany
Read more

27 July 2013 Schloss Nymphenburg After the intensive morning and midday, we headed to Nymphenburg with the local tram.  It originated as a summer palace for Max Emanuel .   It is huge, located on the western edge of the city, surrounded by countryside at time of chosen as the site of the palace.  The first design was Italian.  Construction stopped during the Spanish War.  The construction continued after but in the direction of French design.  The design is symmetrical.  The central pavilion became the focal point. It's a long walk from the traffic to the palace.  The park was huge.  Walking half of it took us 2 hours But the time is worth for the peaceful and picturesque scenes.   Everywhere was green, a presentation of energy, life and vitality.  River, lake, building, pavilion, couple, family, lonely persons.....  All sorts but delighting.
Post a Comment
Location: Nymphenburg Palace, Schloss Nymphenburg 1, 80638 Munich, Germany
Read more
More posts