Showing posts from June, 2016
Show all

16 July 2014 We began the journey from Katzwang to Landshut with a Bavaria ticket , valid from 9am Monday to Friday, midnight onwards during the weekend.   Two persons cost €27, travel valid on local trains only.   The direct train took less than 2 hours. Landshut was founded by the Duke of Ludwig I of Bavaria in 1204. Wow, over 800 years of history!   Its most glorious period ranged from 1393 to 1503.   It was famous for its arts and crafts, attributed to master craftsmen, carvers, sculptors, goldsmiths, etc. Burg Trausnitz The Trausnitz Castle is situated atop a hill above Landshut.   It was founded by Duke Ludwig I in 1204 and completed in 1235.   The medieval castle underwent renovation and restoration between 16 th & 19 th century. The Dürntiz was built and the wall heightened and extended.   Ludwig X furnished the castle in south German Renaissance style in 1516.   Fires destroyed much of the interior and the paintings. One can see the
Post a Comment
Location: Landshut, Germany
Read more 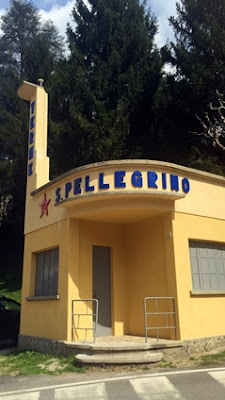 12 April 2015 It was still early April in Italy.  We were lucky with the weather, sunshine and warm.  Friends slept for long as usual. I prepared blueberry almond muffin per recipe from Nancy Silverton .   All 9 were gone quickly.  We were ready for the trip to Bergamo, for an exhibition.  Unfortunately, we could not find a parking space down and uphill.  So, we headed to San Pellegrino Terme . We parked near Tempio dei Caduti . At time, it was closed.  It is a temple of victory, dedicated to the war dead.  Nice frescoes are displayed inside. Right at the middle is a river dissecting the town.  Houses on the both banks are nice.  The town is layback and tranquil. Any one can relax there. The atmosphere may also contribute to the suitability of a venue as a spa resort. It is surrounded by hills.  One can ascend to have a gorgeous view of the surroundings.     Pellegrino is famous for its carbonated water.  It is also home to several Art Novueau edifices f
Post a Comment
Location: 98041 Pellegrino ME, Italy
Read more
More posts